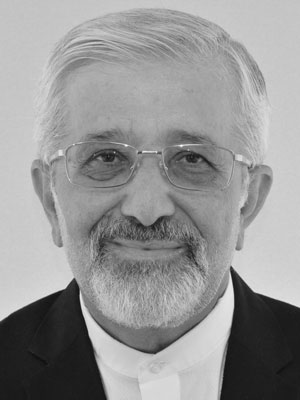 Former Ambassador of Islamic Republic of Iran to the United Nations,

Ali Asghar Soltanieh is a nuclear scientist, university professor, and former diplomat. He has 38 years of experience in international relations and diplomacy, including 12 years as the Ambassador to the IAEA from 1982 to 1987, and from 2006 until 2013. He was the Director of the Nuclear Research Centre of the Atomic Energy Organization of Iran (AEOI) between 1980 and 1990. From 1996 until 1999 he served as the Advisor to the Foreign Minister of the Islamic Republic of Iran. During the past four decades, Ali Asghar Soltanieh has participated in and given lectures at over 190 international conferences, universities and parliaments, including the Strategic Studies Institute in Islamabad (2018), TRT World Forum (2018), and the Arab Centre for Security Studies (2016, 2017, 2018). He has been a Fellow at Harvard University, Belfer Centre (2016), and a Senior Evaluation consultant at UNODC on Sustainable Development Goals (SDGs) (2017). He has been involved in the Comprehensive Nuclear-Test-Ban Treaty (CTBT)(2016, 2017) and the United Nations Industrial Development Organization (UNIDO) (2019). He has been the Chairman of the Asia Group of the G-77 Non-Aligned Movement.