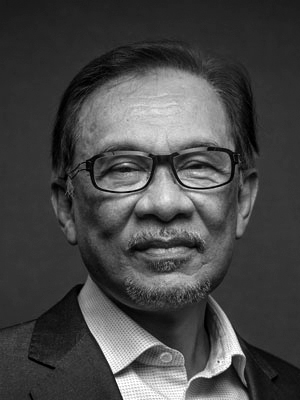 Leader of the Pakatan Harapan Coalition, President of People’s Justice Party of Malaysia,

Anwar Ibrahim is the leader of Malaysia’s ruling Pakatan Harapan coalition, President of the People’s Justice Party, and is expected to lead the country as its eighth Prime Minister. He served as Deputy Prime Minister from 1993- 1998 and Finance Minister from 1991-1998. For his principled stance on issues of justice and the rule of law, he has spent over ten of the past twenty years in solitary confinement as a prisoner of conscience. During this time he has also written and lectured extensively on topics including good governance, human rights and political reform and has held teaching positions at Oxford, John Hopkins, and Georgetown universities.