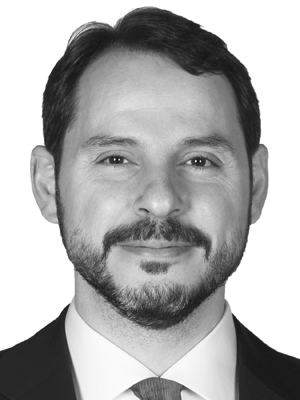 Minister of Treasury and Finance of the Republic of Turkey,

Minister Albayrak was elected as a Member of Parliament for the 25th, 26th and 27th legislative sessions. He served as the Minister of Energy and Natural Resources of the 64th, 65th and 66th Governments of the Republic of Turkey and was appointed as the Finance Minister of the 67th Government. He graduated from Istanbul University’s Business Department. Following his Master’s degree from New York Pace Uiversity’s Lubin School of Business, he received his PhD degree in the field of Banking and Finance with dissertation about “Financing Renewable Energy Resources”. He joined professional business life in 1996. Following his career in the private sector, he began writing a column for the Turkish newspaper Sabah and taught Banking and Finance at Marmara University. Minister Albayrak is married with three children.