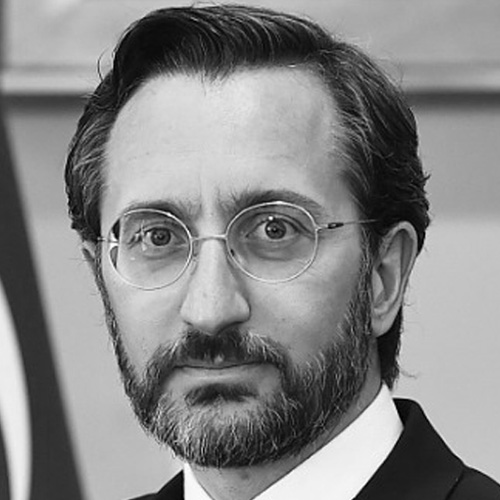 Director of Communications, The Presidency of the Republic of Turkey,

Prof. Fahrettin Altun has been the Turkish Presidency’s Director of Communications since July of 2018. He has lectured at the faculties of communication for numerous institutions in Turkey; he was also the General Coordinator of SETA İstanbul between 2014 and 2018. Prof. Altun has been the chief editor for the monthly magazine Kriter, contributed to the television programmes Enine Boyuna and Dışa Bakış as a commentator, and wrote for Sabah and Daily Sabah as a columnist. Prof. Altun was also an editor for Yöneliş and Küre publishing houses, production director for Anlayış magazine, and a columnist for Akşam newspaper. He is the editor of the book Modernleşme Kuramı and is among the authors of the books Milletin Zaferi: 15 Temmuz, Terörün Kökenleri ve Terörle Mücadele Stratejisi; Türkiye’de Basın Özgürlüğü: Mitler ve Gerçekler; and 15 Temmuz’da Medya, published by SETA. Prof. Altun graduated from Istanbul University Department of Sociology. He received his Master’s Degree in Sociology at Mimar Sinan University and his Ph.D. at Istanbul University.