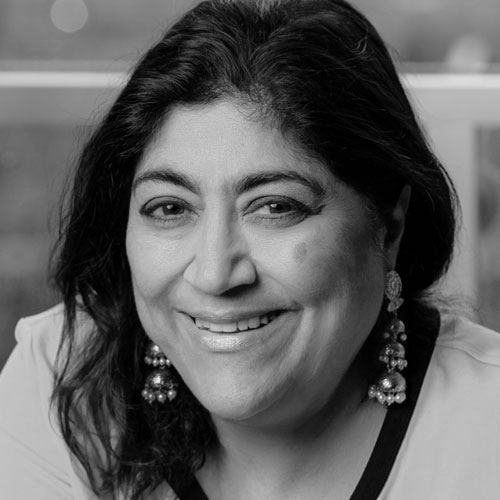 Gurinder Chadha is an award-winning writer, director, and producer whose films have made over $300 million at the international box office. The British Film Institute’s recent filmography study on British Cinema history named Chadha as the U.K’s most prolific female director active today.

Chadha began her career as a broadcast journalist for BBC News before moving on to make several award-winning films, including I’m British But…, Nice Arrangement, Bhaji on the Beach, and What’s Cooking. Her film Bend It Like Beckham was the highest-grossing British-financed film ever at the UK box office at the time of its release.

Some of Chadha’s other hit films include Bride and Prejudice; Angus, Thongs, and Perfect Snogging; It’s A Wonderful Life; and Blinded by the Light. Chadha’s TV company, Bend It TV, creates diverse scripted and unscripted global TV content. Chadha has received several Honorary Doctorates from British Universities and was awarded an O.B.E. in 2006.