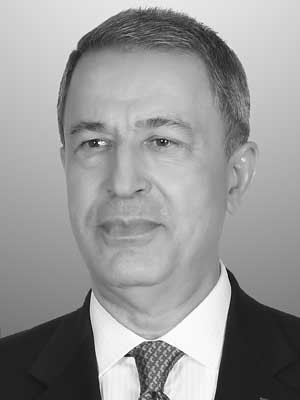 Minister of National Defence of the Republic of Turkey,

Hulusi Akar was born in Kayseri in 1952. He graduated from the Military Academy in 1972 and the Army Command and Staff College in 1982. During his military career of 49 years, he served in various positions in the Turkish Armed Forces and NATO, including as commander of the Turkish Task Force in Bosnia and Herzegovina. Following his promotion to the rank of General in 2011, he served as the Deputy Chief of Turkish General Staff (2011-2013), Land Forces Commander (2013-2015) and as Commander of the Turkish Armed Forces (2015-2018). He was appointed as Defence Minister in 2018. He has been awarded the Turkish Armed Forces Courage and Self-Sacrifice Medal, Distinguished Service Medal and Medal of Honor along with several medals by other countries.