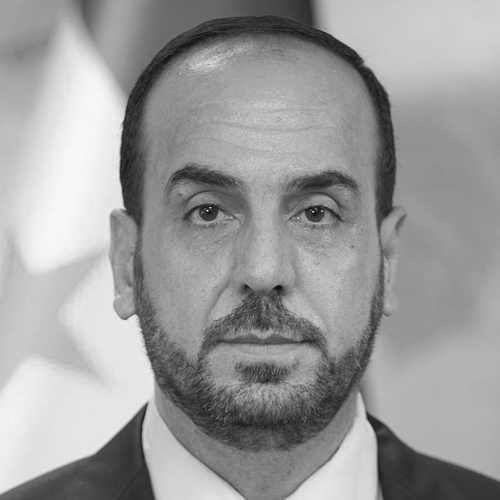 President of the National Coalition of Syrian Revolution and Opposition Forces,

Dr. Nasr Al-Hariri is the President of the Syrian National Coalition of the Syrian Revolution and Opposition Forces. He has a degree in medicine from the University of Damascus, a MA in internal and cardiac diseases, and an Arabic BOARD degree in internal diseases. Dr. Al-Hariri’s was previously head physician at Assad University Hospital and Dara’a National Hospital; Medical Director of Saudi clinics in Al-Zaatari refugee camp; and Director of the Regional Office of the Syrian Medical Commission.

Dr. Al-Hariri has also worked in a political capacity. He was head of the Syrian Negotiations Commission; head of the consultative delegation of the Syrian Negotiations Commission; and the SOC’s Secretary-General. Dr. Al-Hariri is the Co-founder of the National Forum for Democratic Dialogue in Jordan, the Syrian Medical Committee in Jordan, and the Local Committees in Dara’a city. He was also the Head of the Free Association of Doctors and Pharmacists and Founder of the Free Doctors Syndicate.