The Decline of Collective Action in International Politics The End of Multilateralism? - TRT World Forum

The Decline of Collective Action in International Politics The End of Multilateralism? 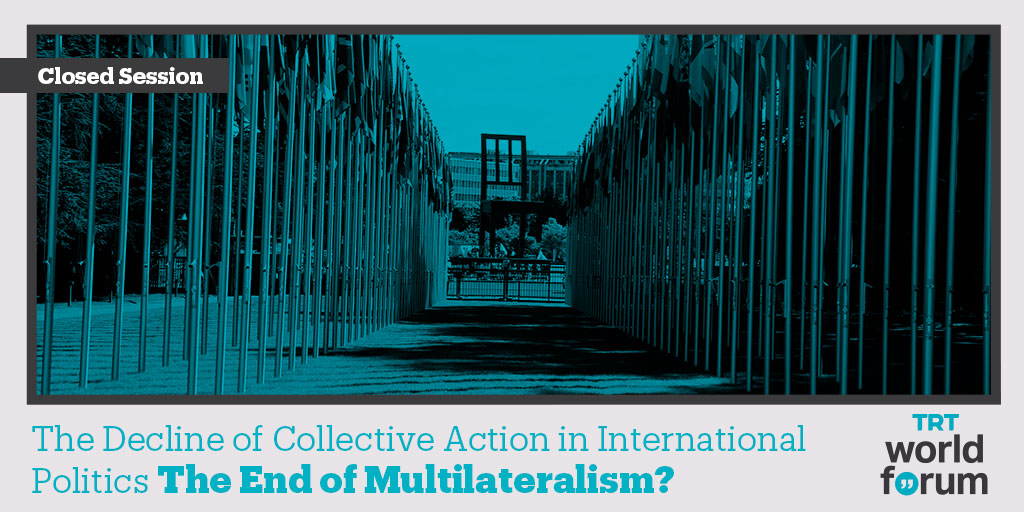 On Monday, October 21, 2019, TRT World Research Centre held a roundtable meeting entitled ‘The Decline of Collective Action in International Politics: The End of Multilateralism?’ The session aimed to discuss one of the most vital questions in international relations: How should states act? Unilaterally or multilaterally? Multilateralism requires states to follow international norms and pay respect to international institutions, whereas unilateralism suggests that states can act alone and shape the international order. In our globalised world, issues require collective action. Climate change, the worldwide refugee crisis, transnational terrorism, human security and development are just a few examples that require states to act multilaterally. Five speakers shared their expertise on this subject and addressed the following themes: Are we heading toward the end of multilateralism? Is multilateralism a silver bullet for every problem we have? What could be the consequences of the continuation of unilateral policies in today’s world? How can international institutions be reinforced at this point in time? How can the shared interests of international society be addressed so that collective actions might be upheld?

Dr. Tarek Cherkaoui is Manager at TRT World Research Centre. Dr. Cherkaoui has an extensive experience in strategic management, research, and consultancy across international media, tertiary education, and the creative industries throughout the U.K., Qatar, Malaysia, and New Zealand. He is an expert in international media and strategic communications, and holds a Ph.D. in Media and Communication Studies from the Auckland University of Technology in New Zealand, for which he was awarded the Dean’s Award for Excellence in Postgraduate Studies. His research interests include international broadcasting, media discourse, international news framing, information warfare, public diplomacy, soft power, nation branding, image management, crisis communication, and political and military affairs – specifically within the MENA region. He has put forward several publications, including The News Media at War: The Clash of Western and Arab Networks in the Middle East (2017) (London: I.B. Tauris). As an academic, strategic communications researcher, and a senior manager within organizations, Dr. Cherkaoui displays excellent interpersonal and communication skills with fluency in four languages – English, French, Arabic, and German.