Geopolitical Dimensions of Energy Resources in the Eastern Mediterranean 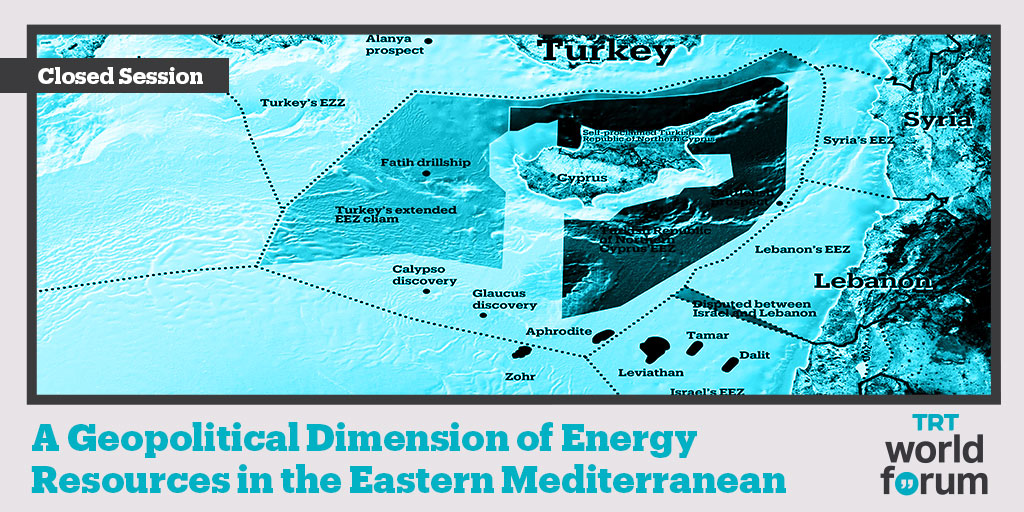 On October 21, 2019 TRT World Research Centre held a roundtable meeting titled “Geopolitical Dimensions of Energy Resources in the Eastern Mediterranean”. This was part of a series of roundtable meetings in the two-day TRT World Forum 2019, which included 12 public sessions and 15 closed sessions and nine keynote speeches and exclusive talks. This roundtable meeting was held in English under the Chatham House Rule. It stipulates that ‘when a meeting, or part thereof, is held under the Chatham House Rule, participants are free to use the information received, but neither the identity nor the affiliation of the speaker(s), nor that of any other participant, may be revealed.’

The ongoing dispute over energy resources in the Eastern Mediterranean has engendered an alarming rise in political tensions on a regional and international level. The anticipated strategic and economic gains associated with the potential of significant energy reserves in the region has not only drawn in regional players such as Turkey, Egypt, Israel, Greece, Cyprus and Lebanon, but also international powers including the United States, the European Union, China and Russia. As exploration tenders are acquired by large multi-national energy giants, stakeholder countries continue to engage in efforts to ensure a fair distribution of the region’s resource potential. The latent wealth located in such a strategic geography raises a number of issues for both regional and international players, including issues of energy security – particularly for Europe – as it seeks to shift its energy dependency from Russia, regional political stability and the prospects for economic growth. The Eastern Mediterranean will continue to pose a geopolitical puzzle and remain a source of potential tension in the foreseeable future until a suitable solution is found.

Alberto Belladonna is a Research Fellow at ISPI where he works in the Centre for Business Scenarios and Infrastructure. He holds an MBA and an MSc in International Relations. Before joining ISPI, Alberto worked as a Business Analyst at the Italian Chamber of Commerce in Guatemala and as Adjunct Professor at the University “Francisco Marroquin” of Guatemala where he taught courses in geo-economics and international trade. Previously, he collaborated with other Italian think tanks focusing on the geo-economics of China, with particular attention devoted to the Belt and Road Initiative and China’s presence in Africa. His research interests are related to geo-economics, international trade and foreign direct investment regulation.