The Disillusion of the American Dream: Covid-19 and the Politics of Healthcare - TRT World Forum

The Disillusion of the American Dream: Covid-19 and the Politics of Healthcare 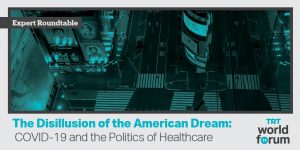 The Covid-19 pandemic has exposed the fragilities of health care systems across the world. This has particularly been the case in a number of wealthy Western countries including France, Italy Spain, and the United States, one of the hardest hit countries in the world. While many of these countries were believed to have some of the best healthcare infrastructure in the world, scenes of overflowing Intensive Care Units (ICUs), lack of vital equipment and morbid images of refrigeration trucks being used as temporary morgues have cast doubt on the capabilities of the healthcare systems in some of the world’s wealthiest countries. In the US, although the healthcare system is funded by a mixture of public and private resources, it is much more reliant on for-profit private enterprise than other industrialised countries. In 2018, it was estimated that 30.4 million Americans were uninsured, and a December 2019 Gallup poll found that 25% of Americans say they or a family member have delayed medical treatment due to high costs.

As seen through the course of the Covid-19 pandemic in the US, in addition to the issues around healthcare accessibility and availability, public health officials have had to contend with a highly politicised and polarised environment surrounding the country’s pandemic management. As the US continues to be one of the worst-hit countries in the world, the failings and vulnerabilities of the healthcare system have been exposed, leading to an increased questioning of the prevailing wisdom around healthcare in the US.