The Israeli-Palestinian Conflict and Israel’s Engagement with Arab States 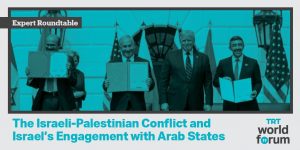 In August, US President Donald Trump announced an agreement between the United Arab Emirates (UAE) and Israel to fully normalise relations in exchange for Israel’s suspension of plans to annex the occupied West Bank. This “normalisation deal” expanded to include Bahrain, with many expecting other Arab and Muslim-majority countries to eventually follow suit. While it has been hailed as a “historic diplomatic breakthrough” by the signing parties, the Palestinian leadership denounced the deal, calling it a “betrayal” of the Palestinian cause.

For years, the fundamental baseline of Arab states towards any potential normalisation with Israel had been conditioned on Israel’s withdrawal from the territories it occupied after the 1967 war and its acceptance of an independent Palestinian state with East Jerusalem as its capital. However, with this agreement, this position has been effectively abandoned. Israel has been shown that ending the occupation of Palestinian territory is no longer a pre-requisite for forging relations with Arab states. This session will focus on the politics surrounding the ‘Abraham Accords’ and its potential impact on the region.