War and Disease: Living with Covid-19 in Syria and Yemen - TRT World Forum

War and Disease: Living with Covid-19 in Syria and Yemen 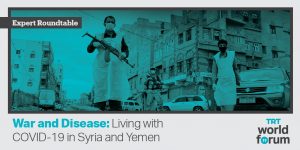 In war-ravaged Syria, already grappling with an economy in tatters, persistent instability and a conflict that, as of yet, has shown no signs at moving towards a viable solution, the Covid-19 pandemic has pushed what remains of the country’s healthcare infrastructure to the brink. After nearly a decade of war, Syria’s healthcare infrastructure has been largely destroyed and the facilities that have remained operational lack equipment, staff and medicine.

Yemen, already the world’s worst humanitarian crisis according to the UN with approximately 80 per cent of the population requiring humanitarian aid and half on the brink of starvation is at a high risk of devastation from the Covid-19 pandemic. Under the worst-case scenario, according to the UN, the potential death toll from Covid-19 is could exceed the total number of people killed as a result of war, disease and hunger over the last five years of conflict.

Although the true scale of the Covid-19 crisis in these countries remains unknown, both require significant international assistance to manage the pandemic. If left to fend for themselves, the number of cases could grow exponentially, resulting in both Syria’s and Yemen’s remaining healthcare facilities being overwhelmed. Adding to the difficulties, ongoing conflicts in both countries mean that pandemic mitigation strategies, such as lockdowns, are difficult to enforce and could result in the snuffing out what little economic opportunity remains for people already living in a fragile humanitarian situation.